When I recently hit an emotional sink hole, I decided to make a plan to get inspiration flowing again.

Sometimes all you need is something happy to anticipate to jump-start your joy.

Music activates something deep inside of me and, in the last decade or so, finding music I liked that was compatible with my partner’s limited my concert-going.  Silly, actually.  I could have made solo plans – but I was always hoping to cultivate “together moments.”

As a result, my love for old school R & B went on the back burner.

Getting back to making a happy plan, as fate would have it, an alert that the Isley Brothers would perform at the Mahaffey Theater in St. Petersburg – just an hour away – made my heart jump.

For as long as I have loved music, the Isley’s have spoken deeply to my soul. Ronald Isley’s voice goes right to the core of my heart. Even covers of other peoples’ songs, like Summer Breeze (Seals and Crofts) or Hello, It’s Me (Todd Rundgren) get transported to an entirely new level by his vocals.

Instead of mulling it over, I clicked and purchased tickets. (This is also part of my new way of life. #JustDoIt.) Since it was a Sunday night concert, I made plans to arrive in the city on Saturday, discover St. Pete and enjoy.

Yippee! Rather than moping and dwelling on the past (which is unproductive, because I am not going backward), I had a date on the calendar to inspire me.

So let me cut to the chase about Gypsy.  My excellent, third-row seats had me almost levitating with joy. I began chattering with my left and right seat neighbors, warning them that when “Who’s That Lady?” or “Fight the Power” was performed, I may begin annoyingly screaming and step on their toes from dancing.

I hate those type of people at concerts, but I knew I might be one of them for this one.

The lady to the right was dressed to the nines in a sparkly black jacket and rhinestones on her glasses. We discussed the Isley songbook and which were our favorites (hers, Summer Breeze; mine, Let Me Know.)

After talking some more, I felt it wouldn’t be too intrusive to ask a follow-up question.

“Is Gypsy a nickname or your given name?”

A stage name!  How exciting!  She’s a performer!

“Oh wonderful!” I exclaimed. “Are you a singer? Or an actress?”

I looked at her quizzically.  She replied,

“My real name is Shirley, but I say Gypsy is my stage name because all the world is a stage.”

I learned that when she is at work or church, she goes by “Shirley.”

But when she is out with her man for a romantic night – or whenever she wants to put on a sparkly hat and her alter-persona, she’s Gypsy.

All the world IS a stage that should be embraced as an opportunity to show up and give it all you’ve got.

(I did tell Gypsy that I have recently given up performing at life because it was simply exhausting, but that I loved the idea of living as the world being MY stage.)

Gypsy may never perform on a literal stage or receive a standing ovation – but she sure is a star.

I’m so glad she shined on me.

All that and the band threw a rose to me!

As we close out INSPIRATION as our Word of the Week, never forget that the world is your stage. And make a happy plan to jump-start your joy!

Goosebumps!  What does AUTHENTICITY mean to YOU?

For me, it is continuing to strip away the layers I created to numb and protect myself from what I have feared.  Whether avoiding a confrontation or walking on eggshells to avoid angry outbursts from others – it’s time to drop the facade and just BE.

What I love about life is that there is always something new right around the corner (if you are open to it) that can bring you an unexpected jolt of joy.

It has always been important to me to stay up-to-date on what the cool kids are doing.

That’s why I subscribe to my Entertainment Weekly magazine.  Even if I don’t read all of those recommended books, download the top songs or Netflix and chill with the latest TV, I at least don’t have a befuddled look of someone out of touch with the present day.

Now that I no longer share a TV (silver lining of living alone!), a whole world of pop culture has opened up to me. No, I’m still a Game of Thrones virgin, but I am completely caught up on The Unbreakable Kimmy Schmidt, fell in love with The Good Place and out of the blue, a dear friend sent me a CD that had me sobbing juicy, snotty tears.

Believe me, I’ve had plenty of BAD ones.  Good cries bring the same kind of release that a sweaty Zumba class offers.  The last two pop culture cries that really “did it” for me were The Notebook (zero makeup left by the end of the film) and The Art of Racing in the Rain. (Best. Book. EVER.)

My friend, knowing that I was facing a challenging time, sent me Moana.  Are you familiar with this Disney animated film?  Well, you should be.  Not having given birth, Disney is not usually in my wheelhouse, but my beloved friends Anna Coker hit the ball out of the park with this gift.

Moana is a lovely little island girl with huge almond eyes and is destined to be the next island leader.  Her father, the Chief, guides her in the ways of the land – but warns her not to ever venture beyond the reef.  He paints the picture of danger and destruction and how she has everything she will ever need right there on the beautiful island. Why leave?

But the ocean calls her.  From the time she was a baby, she was drawn to be a wayfarer – to go to distant lands.

She doesn’t want to be a bad daughter, but she also wants to follow her heart.

If you’ve ever felt drawn to something MORE, but hesitated because you didn’t want to disappoint the people you love, you will LOVE Moana.

I won’t tell you any more because you need to see it for yourself.  And have a good cry.

And when you do, this clip will make more sense.  It is now on repeat on my iTunes playlist:

If you have seen the film (it came out in 2016; where have I been?!), please let me know your thoughts.  Also, have you found something NEW that brings you joy?  Please share! My pop-culture “to do” list is growing by leaps and bounds, but it makes me happy.

Closing thoughts on JOY and the new WOW, coming right up!

Don’t be afraid to ask questions. You are worth getting answers!

During our Question Mark WOW (Word of the Week) last week I asked the universe for happy surprises – and boy did I get one when I least expected it (which is the true definition of a surprise, isn’t it?)

Since I was out, I remembered dry cleaning needed to be picked up, so on my way home, I headed to my favorite local dry cleaner.  Bob in Gulf Gate has inspirational signs all over the place and is so kind he makes me feel like I’m doing something far more interesting than errands.

As I headed back to the car, I looked across the street and saw this sign: “These Quiet Sounds”… 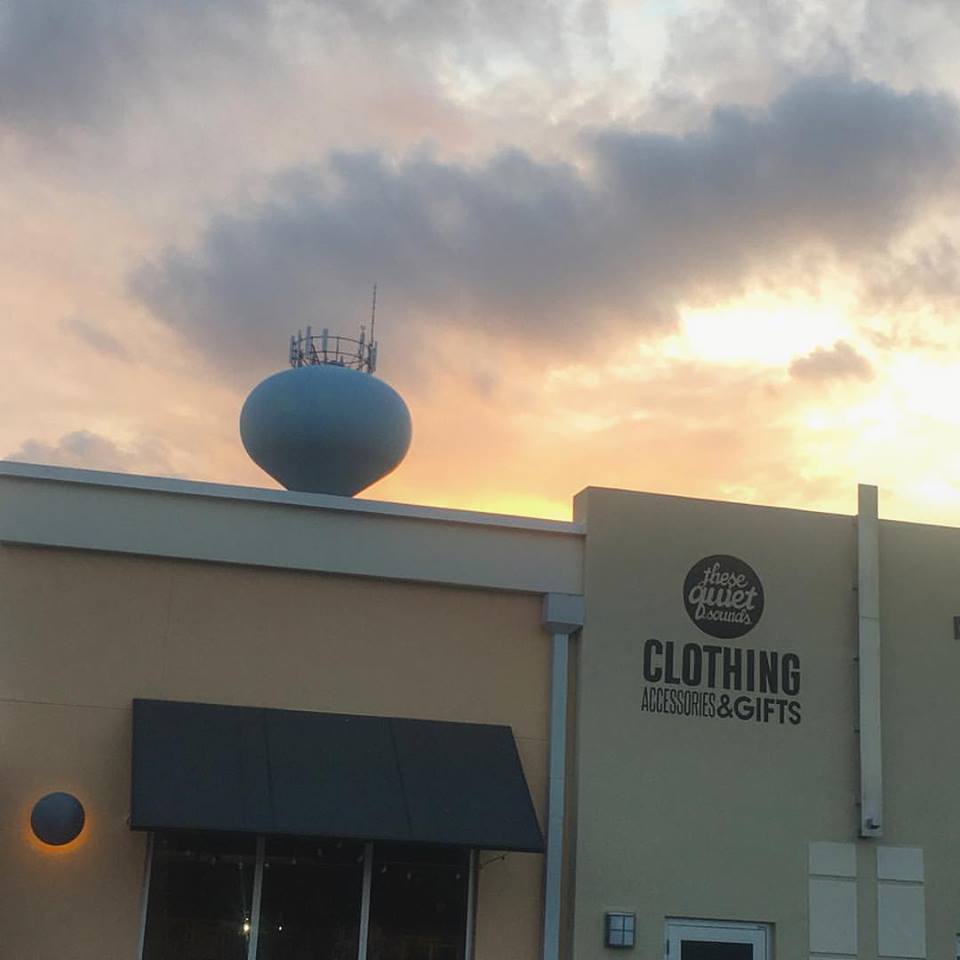 I felt like @#$%^ but couldn’t resist.  (Sometimes that little tug on the inside needs to be followed!)

Inside, such great clothes!  And a handsome young man, who turns out to be a designer of some of the very cool prints and T-shirts carried in the store: 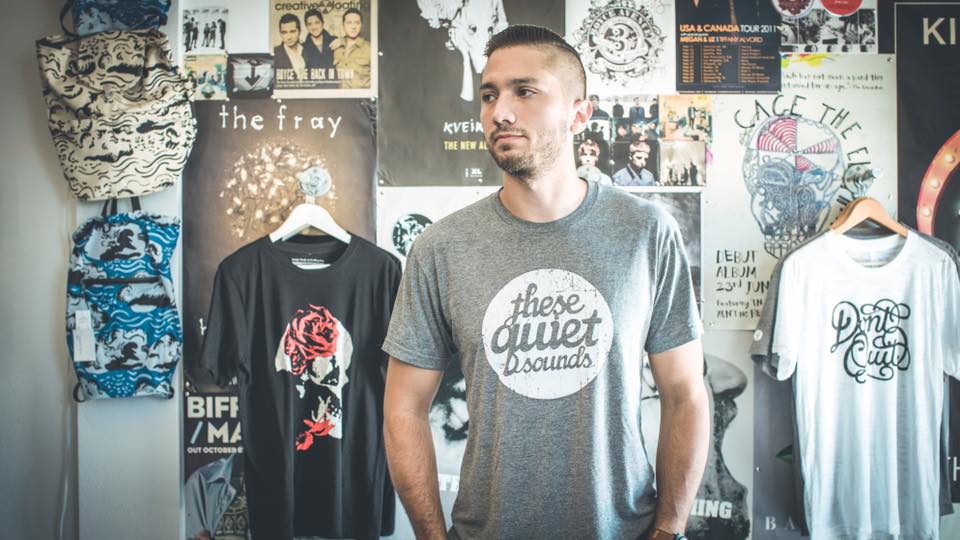 HE’S A YOU TUBE SENSATION.

His band, Boyce Avenue, has over 8-MILLION (yes, million) You Tube subscribers and they play sold out concerts around the WORLD.

What rock have I been hiding under?

They started out (it’s three brothers), recording covers of popular songs, which went viral – and that opened the door for their original music to be heard.

And the music is SOOOOOOOOOOO good.  I hope to do a full fledged interview with Fabian in the near future, but in the meantime, I encourage all of my Sarasota friends to visit his very cool store in Gulf Gate.  (And next visit I hope to meet his wife, who is pregnant with their first child!  Doesn’t it give you all the feels?  It did me.)

And my happy surprise would NEVER have happened if not for my un-happy one.  Go figure!

Here are my final thoughts (stuffy nose and all) on last week’s WOW as well as the new one!

So in the spirit of HARMONY, I leave you with one of my favorite original songs by Boyce Avenue (Fabian in playing guitar in the background).  You will love it – it’s well worth the click (and will give you goosies):

Have a beautiful, harmonious week, everyone!

I am music lover, and you can’t pin me down to one genre.  I’m “All About That Bass” one minute and “The Lady is a Tramp” the next.

On karaoke nights, “It’s Not Unusual” to find me belting out Tom Jones followed up by my best Cher impression.  If it is an especially good night, Duane will accompany me as Sonny.

On this tour of my office, you’ve seen all my little inspirations and memories – but what’s the soundtrack?

On Friday afternoons when it’s close to quitting time, I switch Pandora to either “Stevie Wonder Radio” or “Bruno Mars.”  It’s the perfect “get my weekend groove on” music.

But when I am seriously attached to the computer screen and immersed in productivity mode, I go back to the islands…Maui, to be exact.

Several years ago my friend Anita and I took the trip of a lifetime to Maui, and one of our favorite excursions (after I recovered from the helicopter ride and zip-lining) was to the Saturday morning flea market.  This was no small event; it was ACRES of cool stuff, from potions to art, food to…wait…what’s that sound???

My ears perked up as I heard the most magical chords; it felt like heaven touched down and decided to mingle with us mere humans.

Just like in the Pied Piper tale, I couldn’t help but follow the sound and it led to just one man, standing behind a table, playing his CDs.  He had this very chilled out demeanor, and angelic aura and a very unassuming manner as he whipped out his iPad and sold disc after disc.  I bought three: 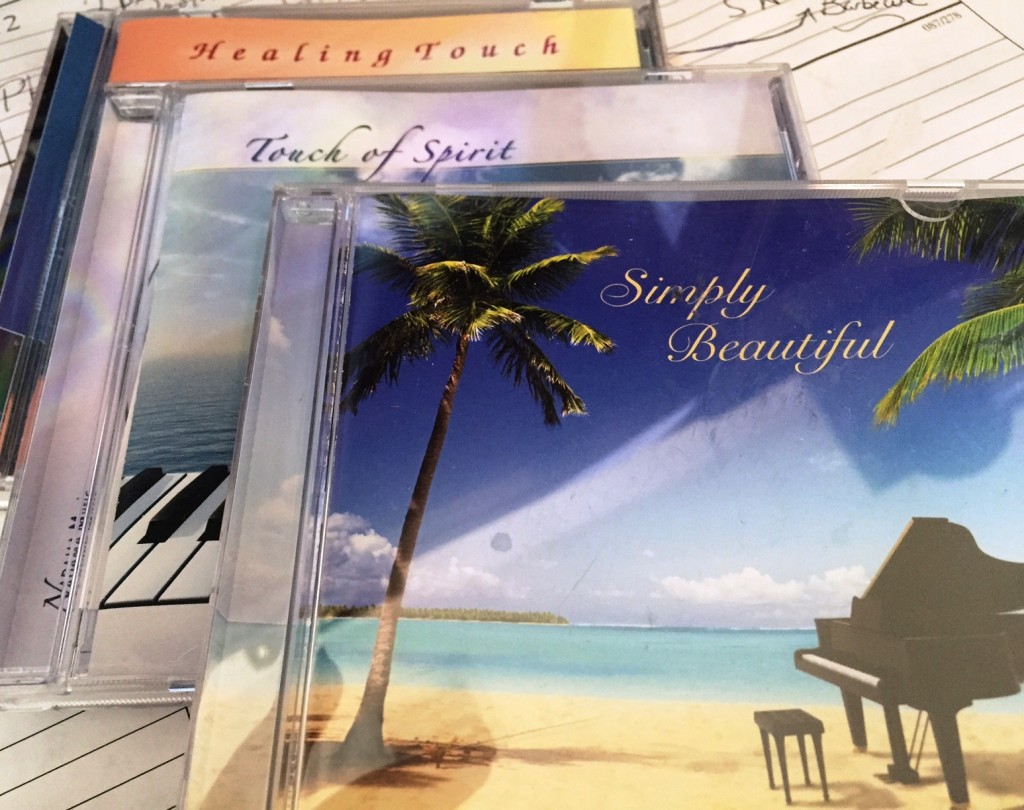 I thought he was a local who was completely unaware of his amazing gift (and in sore need of a marketing guru to put him on the map.)

He is known simply as Nadama, and you need to hear him for yourself.

Turns out he’s doing just fine without a media mogul’s involvement.  I arrived home and turned on Pandora Spa…and there he was.

So, my FLUFFIs, if you need some chill background music or a soundtrack to accompany your meditation, enjoy some simply beautiful Nadama and bring a little Maui to your office.

What music helps you work – or prepares you for the weekend?

Get Brenda’s Posts Directly to Your Inbox!